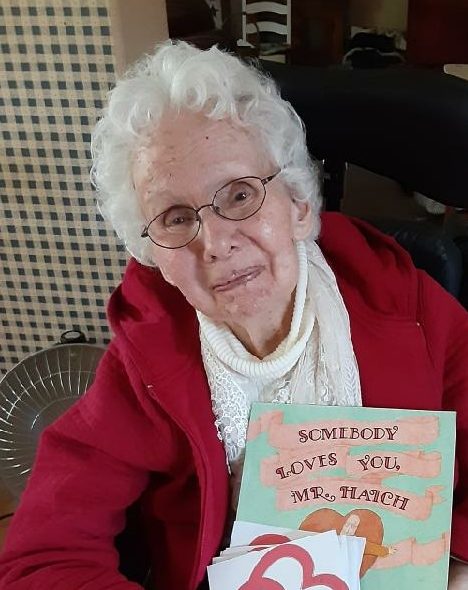 May 30, 1926 – September 12, 2020_x000D_
_x000D_
Beulah Mary Fellows Rust was born May 30, 1926 in Norman, Oklahoma, but spent most of her life in the San Joaquin Valley and southern California.  She was married for over 50 years to Nolan Rust and raised three daughters.   Beulah was a dedicated stay-at-home mom who cooked, cleaned and nurtured with her whole heart.

When the kids were grown, Nolan and Beulah invested their lives in church friends, work, and traveling in their little camper up the coast to their favorite redwood parks. Beulah was also a cancer survivor. After they retired, they moved from Vista, California to Lodi to be closer to kids.  Nolan and Beulah started a retirement business crafting and painting wood projects.  Beulah’s talent and creativity with a paintbrush turned out country-themed art that they enjoyed selling at craft shows.

After Nolan died, Beulah moved into an assisted living community and made new friends.  After a bad fall, she moved into the Fairmont Rehabilitation Hospital where she spent the remainder of her years under the care of some very special workers and her daughter, Nancy.  She enjoyed outings with Nancy, from drives to the foothills for lunch to shopping at Hobby Lobby.  She was always curious about the world and people around her.

She is survived by two daughters, Nancy (Darryl) Seefeldt of Lodi and Sheryl (Joe) Blackinton of Yankton, South Dakota.  Her oldest daughter, Norma Jean Walker, passed away after a lengthy battle with cancer.  She is also survived by her little brother Ronald Fellows of Roseburg, Oregon.  Beulah leaves behind five grandchildren and one great-granddaughter.