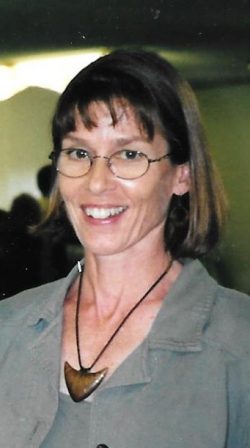 Christine Johnson died on December 20, 2019 after a bout with cancer.  She is survived by her husband Marvin.

She was born June 6, 1949 to Harry & Phyllis Johansen in Grand Rapids, Michigan.  She graduated from Albion College in 1970 and went to Kent State University to pursue a degree in Metalsmithing and Jewelry.  She then went to the University of Illinois where she earned a M.F.A in Jewelry and Metalsmithing.  While there, she met Marvin at the swimming pool and they were married about one year later in 1977.  They moved to Troy, N.Y. where she taught Jewelry and Metalsmithing part time at the College of St. Rose.  She also marketed her jewelry at local and national craft fairs.

Marvin and Chris moved to Turlock, California in 1985 and Chris later shifted her artistic focus to constructing shall wooden sculptures.  She entered and exhibited her work in a number of local art shows.

Chris liked to be physically active and she hiked, swam, ran and did some weight lifting.  She preferred bicycling to driving the car and bicycled to the University to exercise unless it was raining, and even on a few days that it did rain.  She was energetic and had a hard time just doing nothing.  She was clever and enjoyed tinkering with things.  She did most of the “fixing” around their house, inside and out, and she was the driving force behind most of the improvements on their house.  But most of all, she was loving, generous, and supportive.  She was someone people liked to be with.  She faced her illness with courage and hope and even though her hope was disappointed, her courage did not fail.