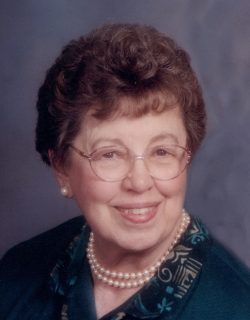 Doris was born on June 20, 1924 in Joliet, Illinois to Richard and Martha Larson.  Her older brother was Richard and her younger brother was Glenn Roger.  She attended Elementary and Secondary Schools in Joliet.  After High School she worked in downtown Chicago at Fireman’s fund Company.  She was an Executive Secretary who was able to write in shorthand.

She met her husband Kenneth Palm at choir practice at the Evangelical Free Church in Chicago.  They were engaged for 4 years while Ken finished his university studies.  They were married on November 24, 1951.  They lived in Evergreen Park, Illinois and raised their three children, Martha Susan, David Allan and Curtis John.

In 1967 Doris and Ken packed up their family and moved to Southern California.  Ken’s company transferred him to the Southern California.  They lived in La Habra and were charter members of the Diamond Bar Evangelical Free Church.  Doris also went to work for Minibus/Universal Studies and Tellkamp Systems.  In 1988, after retiring Doris and Ken packed up again and moved to Turlock to be closer to their families, especially their grandchildren.

Doris was a servant.  Whether wallpapering or painting at a family or friend’s home, baking cookies for someone, making bandages from sheets for the Missionary Doctors in Africa, teaching Sunday School, teaching girls in Pioneer Girls and Awana, she did all cheerfully and willingly.

In 2003, Doris and Ken packed up once again and moved to Hilmar.  They decided their home in Turlock was too large and too much lawn and pool to maintain properly.  They became friends with the people in this community.  She once again made cookies for many folks!

Her favorite Holiday was Christmas and she enjoyed family time at the annual Christmas Eve Smorgasbord.  Of course, her cookies were always the best!

Doris was preceded in death by her parents, Richard and Martha and her brothers, Richard and Glenn Roger.  She is survived by her husband, Kenneth, her three children, Marti (Tom Chance), David (Rachelle) and Curt (Nancy), her nine grandchildren and 9 great-grandchildren.

In lieu of flowers donations may be made to Awana International, One East Bode Road, Streamwood, IL 60107 Acct #317 or to the American Diabetes Association.