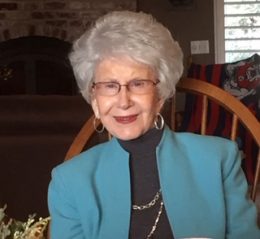 She was born April 5, 1925 in Pineview, Georgia to Oscar and Minnie Lou Bolton. She is preceded in death by her husband, Raymond Rentz, and brothers, John, Mahlon, and Bobby Bolton.

Elon spent over five decades in the banking industry, starting in Long Beach, California and later in Turlock for the Bank of California. Promotions within the bank took her to stops in Riverbank, Sacramento, and San Francisco and in 1978, she graduated from Seattle’s Pacific Coast School of Banking. While in San Francisco, Elon worked as a troubleshooter for the bank, traveling to branches throughout the Bay Area to help with operations issues and commuting to Turlock on weekends. Elon moved back to Turlock following her retirement from the Bank of California, but that didn’t mean she was ready to slow down. Along with working as a part-time bank teller for a local bank until she was 85 years old, she also helped the Turlock Soroptimist Club raise scholarship funds for low income women, served as treasurer for the Turlock Reading Club, and was a member of the Red Hatters Club. Elon enjoyed the many cruises and trips she took with her daughter and son-in-law, as well as their weekly Friday night dinners out. She was a longtime member of the First Baptist Church of Turlock.

Special thanks to the several caregivers who provided Elon with invaluable care during the past two years. She will always be remembered as a loving mother and grandmother, who had a passion for fashion and put the needs of others above her own.

Services for Elon will be held at Allen Mortuary on Monday, November 11 at 1 pm. A private burial will be held on a later date.