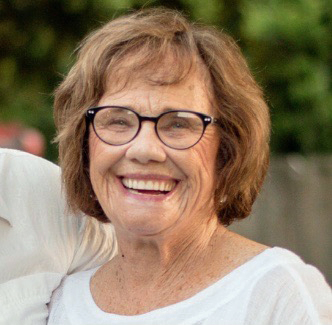 September 4, 1938 ~ January 15, 2021_x000D_
_x000D_
Joanne Claralyn Spycher went home to be with her Savior on January 15 in Modesto, CA.  She was born in Los Angeles, CA in 1938 and lived there until she was eight years old when she moved to Kingsburg, CA.  It was during her three years in the small farming community of Kingsburg that she fell in love with agriculture and the lifestyle that comes with it.  Joanne’s junior high schooling was spent in Chicago, IL until her freshman year of High School when her family moved to Turlock- the city that became home.

It was at Turlock High School that she met her husband of sixty years, Hartley Spycher.  Joanne made many lifelong friends at Turlock High.  After high school, she received her lifetime teaching credential at Fresno State University and went on to work in the Fresno school system.  In 1961 Joanne married Hartley and they began a successful career in agriculture.  They moved to Ballico, CA where she took a job teaching fourth grade.  She made a real impact there and had an annual reunion with her past students.  During her time as a teacher at Ballico, Joanne had two sons, Eric and Kurt, and bought her only home.  Joanne and Hartley loved to travel and together with close friends and family successfully toured most of the world.  Joanne was a lesson in faith and stability, and truly our family’s anchor.  Her relationship with her Savior was first in her life and we know she is celebrating with Him now.

A memorial service will be held at 11:00a.m. on Saturday, January 23, 2021 at Monte Vista Chapel in Turlock and can be viewed live online at mvcturlock.com.

Memorial donations may be made on Joanne’s behalf to Westside Ministries in Turlock.  Please share your condolences at www.AllenMortuary.com.