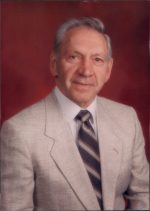 As a boy he attended Saint Joseph’s Catholic School.  He learned how to ice skate on the frozen ponds in North Dakota, and was a graceful ice skater as an adult.

John joined the Marines with his cousin Tony and was stationed in Miramar, San Diego.  He returned to North Dakota to attend Dickinson University and received a Bachelor of Science degree with a major in Social Science, Physical Education and a minor in Mathematics.

John met the love of his life, Corrine Purdy in North Dakota, married in 1953 and they relocated to California in 1957.  He first taught at Riverbank School then eventually at Turlock High School until he retired.

He was a beloved algebra, calculus, geometry teacher and coach to many students in Turlock and taught for over 30 years.

Memorial contributions can be made in John’s memory to Alzheimer’s Association.

A private family graveside service will be held.