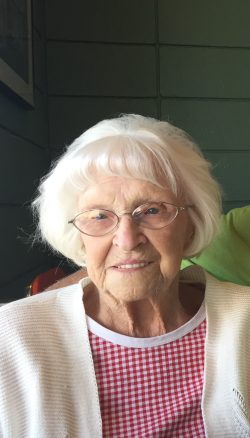 Lady Laudine Pickle was born May 3, 1926 to Howard Clifton Pickle and Girthrie Pickle in Stallo, Mississippi.  After moving to Roswell, New Mexico, the family migrated to California where Lady graduated with honors from Roswell High School.  After graduation, she worked as a waitress at the Carolyn Hotel and at Latif’s Restaurant before meeting and marrying Oren “Pete” Petersen.  From this union were produced three wonderful sons, Keith Petersen, Richard Petersen and Robert Petersen.  Richard and Robert are deceased having been cared for during their illness by Lady.  After marrying Oren, Lady began working in the office of both the Modesto Livestock Auction and Silviera’s Auction in Modesto.  It was in the early 1970’s that Lady Laudine began her career in banking, working for Bank of America in Merced, Turlock and Modesto.  After 17 years, she retired from the Bank after attaining the position of Branch Manager.

Her life was spent helping others to see joy in their lives.  Lady volunteered for the Emanuel Hospital Auxiliary and was very active in the First Baptist Church in Turlock.  In 2000, she married Cliff McBeath and spent the last years of his life traveling and enjoyed one another’s company.  It was during this time that she began to be addressed as Lady McBeath.  She always said it sounded so royal and got joy out of seeing people’s reaction.

Family was very important to Lady and many of her happiest times were the times she spent with her family.  She loved them all from her siblings to her great grandchildren.  She will be missed.

Lady is survived by her son Keith (Marlene) Petersen of McKinney, Texas, three grandchildren, and four great grandchildren.  She is also survived by her brothers W. Howard Pickle of Aptos, CA and Bill Pickle of Atwater, CA. Lady is preceded in death by her husband Clifford McBeath, two sons Richard and Robert Petersen, her brother James Pickle and her sister W. Katherine Hart.

Visitation will be from 5pm – 7pm on Tuesday, March 3, 2020 at Allen Mortuary. A memorial service will be held at 5pm on Wednesday, March 4, 2020 at First Baptist Church.