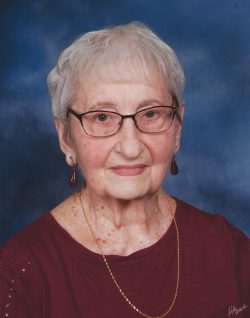 March 29, 1929 – June 16, 2020_x000D_
_x000D_
Marion was born in Snelling, California, the youngest of Dennie and Bessie Hackett’s six children.  Marion attended Ceres Elementary and Ceres High School.  After WWII she attended Modesto Junior College.  In 1948 Marion married her high school “˜heart-throb,’ Orville Young.  Orville and Marion lived in San Jose, Le Grand and Hilmar, before settling in Livingston, where they eventually built their forever home.  Orville and Marion lived in Livingston for over 50 years, where they raised their three children, Anita (1951), Gloria (1953), and Roger (1955).  Orville spent his career as a teacher and coach, and spent 30 years at Livingston High School.  Marion had wonderful memories of many years of Friday nights cheering on the home team.  Orville and Marion were very active in their church, Livingston United Methodist Church, where Marion was member for 60 years, sang in the choir, and acted as church treasurer or auditor for over 40 years.

When the children left home, Marion returned to college, earned her degree, and became a CPA at the age of 50.  She founded her own accounting business in Livingston, which she ran for many successful years.

Marion loved music, piano, ukulele, and singing, and performed in the church choir as recently as December.  She also loved camping, and in particular, her family fun weekends.

After 61 years of marriage, Orville died in 2009.  Soon after Marion moved to Covenant Village of Turlock, where she enjoyed eleven years in her little apartment, surrounded by many friends.

A private, graveside memorial service was held for Marion on June 22.

A public memorial service will be held in the future at Livingston United Methodist Church.

Remembrances can be made to Livingston United Methodist Church, Covenant Living Benevolent Fund, or the American Cancer Society.