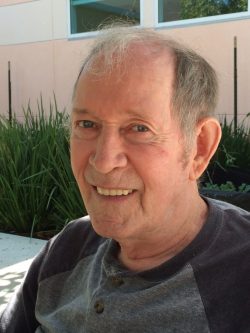 Tom was born on March 26, 1944 to parents Colin and Frances Senior in Centerville, Iowa. He was the youngest of four with two brothers Frank and Colin Jr., and one sister Nancy. Both parents and all siblings preceded him in death.

During high school in 1963, Tom intentionally stepped on the shoe heel of a girl at the county fair in order to get her attention. That unconventional act led to his first marriage of almost 33 years to Charlotte Simmons. Any thoughts of marriage were initially put on hold though, since his mom and dad insisted on Tom finishing school at Kirksville College in Northern Missouri. Through college, he
continued dating his high school sweetheart, Charlotte, and the two were married in October of 1967. Tom was shipped out to Vietnam one month later.

While in Vietnam, Tom was awarded the Commendation Medal with V-Device (for valor) for using his team to secure a safe retreat for wounded soldiers during a major campaign, single-handedly battling through enemy lines to direct support with smoke grenades, and then himself helping a wounded
soldier on his return to his team.

In 1972, Tom and Charlotte moved from Centerville to Elgin, Illinois, where they built a house, raised their young son Shawn (born May 1970), and later welcomed their daughter Sheri (born March 1973). By 1979, with a little money in their pocket, they moved the family back to Iowa to be close to the extended family where they built a house in Davis County. In 1987, during the Rust Belt economic
depression in the 80s, Tom headed West to find work, which eventually led to relocating the family once again to California. Tom quickly realized that he loved California and vowed to never leave.

When not working, which didn’t leave too much time to spare, Tom loved fishing, camping, and road trips. Family trips took him east to New England, north to Wisconsin, and south to the Smoky Mountains, where he once fended off a charging bear by standing his ground with the confidence of a 2-inch pocketknife. After moving to California, road trips became easier since there’s plenty of National Parks and other sites within a day’s trip. Tom and family became camping regulars at these parks up and down the West Coast.

In June of 1999, Tom started a new life with his new bride, Delores Durbin, also welcoming to the family her son John, and expecting daughter-in-law Socorro; Delour arrived three months later. They built their dream-home from the ground up in Hilmar, California where Delores still resides. The two of them invested a lot of time and effort perfecting every aspect of the property to Tom’s exacting details, which came from both his learned and God-given mechanical inclination.

In November of 2004, Tom was trimming a tree on their Hilmar property when he almost fell. Not taking this as a warning and being stubbornly committed to doing things himself, after a short rest he again climbed up the 20-foot ladder into the tree. Fate was not as kind on this second attempt as a trimmed branch swung down and knocked him to the ground. He was airlifted to the hospital after
suffering major head trauma and spent six weeks in a coma.

In 2005, Tom was recovered enough to attend the wedding ceremony of his son, Shawn, and Patti Rouzer. They had been seeing each other since 1999 and had a beautiful Sonoma wine country wedding. The two of them eventually provided Tom with two granddaughters, Cady in 2008 and Raya in 2012.

In 2011, Tom was exhibiting signs of accident onset dementia after suffering a heart attack, which eventually progressed to the point where Delores needed help for his care. He ended up at the VA Community Living Center. The erosion of Tom’s motor skills, though very slow at first, took a big turn about six months ago when he started falling frequently.  At that point, the VA put him in a reclining chair to keep him from walking and his decline accelerated until he finally succumbed to the head trauma that he sustained after falling from that tree 16 years ago.

Tom’s family always considered the time with Tom after his accident as bonus time since the doctors didn’t think he would survive.  During this time, he met his two biological granddaughters, witnessed his own daughter find her career and life path, and learned how strong his wife’s love really is.  Tom’s family is very thankful for this time, but also knew that the bonus time was up and that he needed to move toward that next phase, the peace of the hereafter. He will be missed dearly.

Tom’s memorial will be held once the current pandemic allows. The family would like to thank the VA Community Living Center for the loving and compassionate care they provided Tom; he was in the right place. In lieu of flowers, donations to St Jude Children’s Research Hospital at www.stjude.org/donate will be appreciated.

Private Graveside service on August 4, 2020 at 10:00am at San Joaquin Valley National Cemetery.