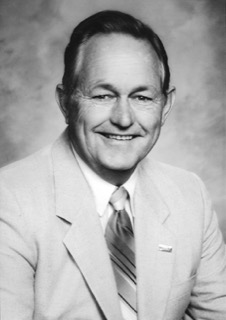 Larry was raised in the San Fernando Valley when it was still mostly rural. During WWII the family had a victory garden, raised a few chickens, and a cow. This led to an interest in agriculture, and a career that began when he received his Bachelor of Science in Animal Husbandry from California Polytechnic University in 1952. While in college Larry met and married the love of his live, Mary Ann Lockett.

After college Larry joined the Navy and went to Officers Candidate School in Rhode Island. He served 4 years in the Navy during the Korean war on multiple ships in the Pacific Fleet. Larry and Mary Ann then moved to northern California where he worked for General Mills and later for Pillsbury. Between 1963 and 1972, he ran his own laying hen ranch, and a turkey ranch in Coulterville. For the following 15 years, he served as Executive Manager of the Stanislaus County Farm Bureau while farming 25 acres of almonds and walnuts near Hughson. Larry also worked for Stanislaus Farm Supply for nearly a decade. He was a member of Blue Diamond Growers and the Cortez Hulling Association. In his “retirement,” Larry developed a 50-acre almond ranch in Montpelier, which family referred to as “the best-looking almond ranch in all of Stanislaus County.”

Larry was also a committed volunteer with the Denair Lions Club, Hughson 4-H, National Ag Science Center and many others. In 2003, he was inducted into the Stanislaus Ag Foundation Hall of Fame in honor of his extensive contributions to the promotion and preservation of agriculture.

Larry is survived by his loving wife Mary Ann, of Turlock, sons John of Modesto (Stacie Bradford) and Steve (Mary) of Oro Valley, AZ and many other family and friends who enjoyed him and the produce from his gardens.  Larry was preceded in death by his parents, sister Sally Mathews and brother-in-law Bill Mathews.

In accordance with Larry’s wishes, no services will be held. Larry’s ashes will be committed to the sea in Santa Monica Bay, and with the ashes of his parents, sister, brother-in-law and in honor of his Navy career.

In honor of Larry’s life-long contributions to sustaining and promoting agriculture, remembrances may be made to a local food bank, Community Hospice, or a charity of your choice.  The family wishes to thank the staff of Paramount Court for their care and enjoyment of Larry, particularly during these difficult times.