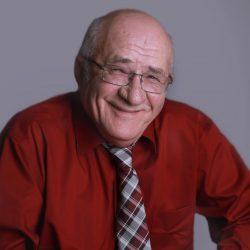 Walt, of Ukrainian descent, was born in Buchool, Germany in 1947. He immigrated to the United States in 1955 with his parents and brother. They settled in Priest River, Idaho, where they were surrounded by other Ukrainian families. He graduated from Priest River High School in 1967. After high school, he joined the United States Army 82nd Airborne Division and served in the Vietnam War, where he was honorably discharged in 1970. Walt continued to be a patriotic man and was proud of the USA.

After the war, Walt met his wife of 50 years, Cheri, while working for Burlington Northern Railroad as a lineman in Spokane, Wash. Walt then began his career at Diamond International in Oldtown, Idaho becoming head sawyer until the mill closed. Walt loved hunting, fishing, old movies, riding his motorcycle, and anything with a lot of horsepower, but most importantly, he lived for his family. He was a man of much patience and generosity. He would help anyone at any time. He was known for grilling steaks in three feet of snow for anyone who asked for them.

In 1996, Walt moved to Chehalis, Wash. where he eventually retired from his career as a sawyer in 2000. With all the kids out of the house, Walt and Cheri moved back to Coeur d’Alene, Idaho before moving to California in 2015. Walt never quit calling Idaho his home. He was preceded in death by his parents Wolodamir and Maria Kuprienko and in-laws Harold and Josephine Vietz.

A celebration of life will be announced at a later date. Allen Mortuary in Turlock, Calif. is in charge of arrangements. Family and friends are invited to sign the online guest book below.