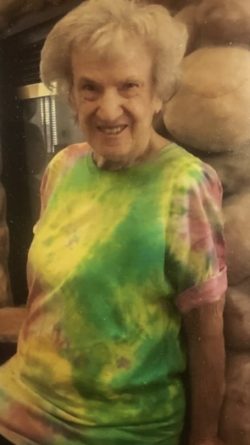 Faye passed away at Paramount Court senior living surrounded by some of her daughters and granddaughters. Due to the COVID 19 rules not many family members were able to be at her side.   Paramount was her home for the past 3 years.  She loved many of the employees there and they loved her back.

She was born on the family farm in Hilmar, CA on October 6, 1932 to Everett & Lucille Edeal.  She was raised in the central valley of California along with her 2 brothers.  She attended school in Merced, Delhi and Turlock.  She was a graduate of the class of 1950 from Turlock High School.   After graduation, she went to Business College to learn bookkeeping and she worked at TID.  She married Jack Anderson in May 1953 and they had 5 daughters.  Her girls and grandchildren were her pride and joy.  Mom and Dad owned and operated “Anderson” Market in Turlock for over 20 years before moving to the Sonora Area.  She worked as a bookkeeper for several companies and they moved to Fresno area for several years then back to Sonora.  Jack passed away in December of 1996 and mom started to live life by herself.  She attended a bereavement support group and met Everett Atkinson, little did she know that she would marry him years later.   They had several years of an active happy marriage before Everett’s Parkinson’s could no longer allow him to be kept at home.   Upon Everett’s death in 2015, Faye moved to back to Turlock.   She enjoyed family times and watching the birds come to the feeders outside her window.    She was a woman of God and her faith never wavered. She did not push religion on anyone and prayer for everyone.   She had a great sense of humor and was kind to all she met.

She is survived by her brother Ron (Kahleen) Edeal of Gardnerville, NV, Sister in Law Marlene Sanders of Turlock, Brother in Law Arden (Marilyn) Anderson of Palo Alto, Ca and 5 daughters Karen (Ken) Baker of Fresno, Susan Anderson (Turlock), Jeanne (Bob) Endsley of Modesto, Cindy (JR) Urbina of Lathrop and Diane (John) Malstrom of Twain Harte, 15 grandchildren and 10 great grandchildren with another 2 on the way along with many nieces and nephews.  She was preceded in death by her parents Everett and Lucille Edeal, husband Jack Anderson, Brother Wally Edeal and husband Everett Atkinson.

Faye would tell us to “do the best we can” and to “be nice to everyone, you never know what they have gone through”

The family would like to express a special thank you to Paramount staff for their love and care of our mom.   A big thank you to Dr. Hundal for going above and beyond what a doctor does,

A Celebration of life will be held at a later date due to the current world conditions.  In lieu of flowers, please make a donation to Cystic Fibrosis foundation or the Heifer project International.