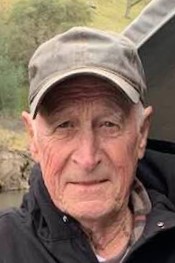 Married to Willa June (Royston) Kruenegel on July 7, 1960; they were married for 59 years.

Russ worked as a Printing Pressroom Research and Development Supervisor for Crown Zellerbach.  He was with this company for over 40 years and earned a very distinguished reputation in the field.  Russ and his colleagues were instrumental in the development of the Flexographic printing technique.

Russ loved spending time at the family cabin in Clearlake with everyone. He truly treasured the moments he was able to share fishing with his son and grandsons. He was a man who had many hobbies and with gifted hands that could fix anything.

He was preceded in death by his mother Delsie Kruenegel, uncle Lehman Meseke, and brother Roy Kruenegel.

He was a man very much admired, respected, and loved by everyone.