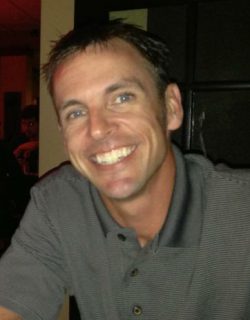 March 1979 ~ November 2018_x000D_
_x000D_
Chad died at home from stomach cancer after kicking cancer’s butt for the last two years.  He was 39.  He never gave up and he never lost his glorious smile.  With Chad’s incredible optimism, he was probably shocked to realize he had actually left this world, but he most certainly was delighted to find himself face to face with his dear Savior, Jesus Christ, who had sustained him through it all.  He shared his faith with so many on this dreadful cancer journey, that many hearts were touched by his testimony.

Chad leaves behind his two beloved little girls, Katie Jane, 9, and Natalie Rose, 6.  They were the light of his life and he was so proud of them.  He also leaves behind his favorite sister, Carrie Brass (Brian), who took wonderful care of her little brother.  She held him in her arms as he took his last breath.  Chad is also survived by his parents, Larry and Pat Corona, as well as nephews Matthew Gonzalez and Brandon Brass and his niece Abigail Brass, all of Modesto.

Chad graduated from Beyer High School, a minor miracle in itself, praise God.  Three days later he started work at Larry Corona Construction and over the last 20 years he built lasting relationships with many clients who treasured him.

Chad was an avid golfer, snow boarder and wake boarder.  He usually saved his best wake board tricks until there was a boat with girls close by.  Can’t blame him.  Chad had a charismatic personality and a delightful sense of humor.  He made many friends at Kaiser Oncology during his 50 rounds of chemo.  He received loving care, even if the nurses wouldn’t go out with him!  Special thanks to Dr. Pickell.

Chad loved the Lord and his church family at Shelter Cove Church.  We praise God for the time we had with him.