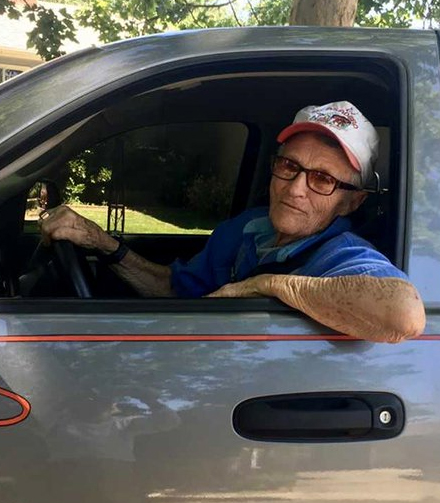 May 1914 – October 2019_x000D_
_x000D_
Don Thompson was born on May 19, 1914 on a Cherokee Reservation in Oklahoma, one of nine children of Richard Thompson and Alma Gresson. He left home in his early teens to start an adventurous life that would ultimately take him out West.  Always a hard worker, he had numerous jobs even before becoming a truck driver at age 16 (although he was actually 14 at the time and convinced his employer he was of legal age to drive). After making the difficult journey during the Great Depression, he settled in the Los Angeles area working in building maintenance and eventually formed his own company, contracting with aircraft manufacturing companies.

Don was known to all as always helping those in need. Fortuitously, he befriended an elderly couple in his neighborhood who began having difficulty and of course, Don stepped in to help them.  Through them, he met their daughter, Nancy Soderstrom, of Turlock.  They fell in love and married in 1974 at the First United Methodist Church in Turlock.  After Don moved to Turlock, they spent many years enjoying their lives together taking numerous memorable trips to Europe and Asia, among other destinations.

Don was a central figure in the lives of Nancy’s daughter Patti and her husband Dr. Jim Day, helping to raise their children Kevin and Seana.  Nancy passed away in 2016 at 100.  She had suffered a stroke at 97 and Don lovingly cared for her at home for the duration of her life.

Don never stopped working, taking care of his apartment complex and doing whatever was needed to help his tenants and friends around Turlock.  Even during his final days, he was working to help move furniture and do rooftop and plumbing repairs on his apartments.

A memorial service will be held on November 8th at 1pm at the First United Methodist Church in Turlock, 1660 Arbor Way, Turlock, CA.