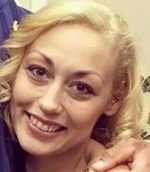 Elizabeth, or Liz as she liked to be called, was born in Modesto, CA at Memorial Hospital on May 11th, 1983. She graduated from Beyer High School and went on to work as a supervisor in the service industry, sometimes working two different jobs at a time. She had her twins Deiondre and Dajai, and her son Donovan shortly after that. She received a Medical Terminology Certificate from Valley College of Modesto as well as a Typing Certificate. But most importantly, dedicated her life in service to Jehovah God. She found love and was married to Jonathan Creal in 2017.

Elizabeth fell ill in 2018 and was eventually diagnosed with stage 4 liver failure. Through it all she never lost her quirky sense of humor, as well as her compassion for her fellow man. She was very kind, always friendly, and maintained a sense of curiosity and wonder about what every person’s “Story” was. Who they were, where they came from, and was there anything she could do to make their life better.

She was strong, intelligent, selfless, caring, compassionate, driven, stylish, regal, with such grace, impartible joy, magnetic presence, and a timeless beauty; she truly lit up a room!

Her strong faith kept her happy through her ordeal, knowing ultimately that when she should pass away, she would have the hope of the resurrection!

Final thoughts – her sister Jessie Reusch loved her sister Elizabeth and I quote, “like a fat kid loves cake!” Liz always loved hearing her sister say that to her!

Her husband Jonathan Creal feels that Elizabeth Reusch entering his life was nothing short of his prayers being heard and then answered! And is grateful not just for all the days they were together, but the fact that he was privileged enough to call her his wife! And he looks forward to seeing her in paradise!

(John 11:25) – Jesus said to her: “I am the resurrection and the life, the one who exercises faith in me, even though he dies, will come to life.”