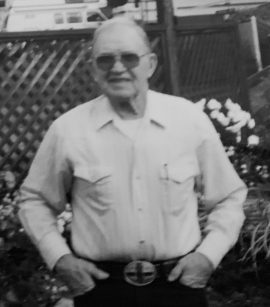 Oct. 1925 – Oct. 2018_x000D_
_x000D_
Franklin Paul Azlin went home to the Lord and joined his daughters Karen and Diana Jo as well as his grandson Ramon, who all predeceased him.  He was married for 72 years to Dorothe (Dottie).  Also left behind was son Steven, wife Dee Dee and family.  Frank was born in Oklahoma City to Frank and Pearl Azlin.  He was the second oldest of four children: Eva (deceased), then Frank, followed by Bernice, and Nelda.  Frank (Paul to his family) went briefly to school in Oklahoma before the family moved to California and settled in the San Joaquin Valley.  He left school and joined the Navy to serve during WWII, as an Electricians Mate and was discharged in 1946.  He returned to California, joining his family in Sacramento, where he met Dottie Banks.  Three months later they were married.

Frank found employment as an electrician, following in his dad’s footsteps as well as his Navy experience.  His work took him from Sacramento (IBEW 340), to Modesto, Napa, and Susanville, where he retired from State of California employment.

Frank continued to follow his trade at various businesses.  Most proud to him however was volunteering as a “˜Fixit Man’ at Centenary Methodist Church.  Another interest that he participated in was with the Masonic organization   He was accepted into the Masonic Lodge and was a past Master of Napa Lodge 780 F. and A.M.

Frank and Dottie enjoyed many activities, including square dancing for 49 years, Frank calling for 20 of those.  The family also enjoyed many camping outings and in later years, the couple spent many years RVing.  One opportunity they had was being assistant managers of an RV park.  Frank did maintenance while Dottie worked in the office.

In lieu of flowers, donations to the charity of your choice or Centenary Methodist Church would be appreciated.

Memorial service will be held at Centenary United Methodist Church in Modesto on Friday, October 19, 2018 at 11:00a.m.  Please share your memories at www.AllenMortuary.com.