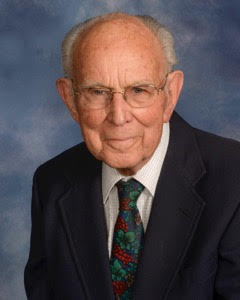 1921 – 2018_x000D_
_x000D_
George D. Tallman passed away peacefully at age of 96 with his loving wife by his side. He was born as the only child of G. Daniel and Bertha (Mullen) Tallman in Des Moines, Iowa and lost his father to a flu epidemic at the age four. He spent his summers on his uncles’ farms and later attended Iowa State Teachers College prior to joining the Navy in 1942.

In 1945, while in Naval pre-flight training in San Luis Obispo, he met his future wife, Arlene Colwell, at the Methodist Church. They married after he was discharged in 1946. George attended Cal Poly earning degrees in graphic arts and mechanical engineering. In 1950, they moved to Turlock where he started his first job as Superintendent of the Daily Journal where he worked for more than twenty years. Following a short career at Valley Printing in Ceres, he went to work for Swanson Farms and Associated Feed where he continued doing special projects well into his 90’s.

In 1950, George joined the Turlock City Fire Department where he was instrumental in designing and building the city’s first rescue truck. In 1958, he moved on to the Turlock Rural Fire Protection District as a charter member. He was honored for more than 55 years of volunteer fire service by having the fire station dedicated in his name. He retired in 2006 after serving as Secretary/Treasurer to the District Board of Directors.

George was a talented engineer – he could fix ANYTHING! In 1996, he was recognized as Citizen of the Year by the Turlock Chamber of Commerce,and received an Outstanding Senior Award in 1997 by Stanislaus County Board of Supervisors. He had a lifelong passion for choral music, and was known for his strong baritone voice as he participated in naval and church choirs, including Townsend Opera Players, Community Concert Association and Golden Valley Chorus, receiving the “Barbershopper of the Year” award in 2001.