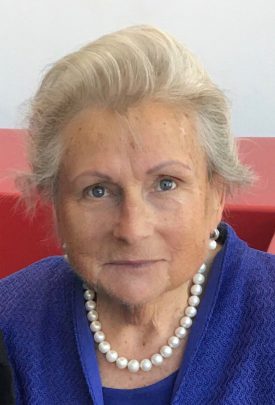 April 1933″”June 2019_x000D_
_x000D_
Longtime Big Oak Flat resident Helga Anker, 86, died peacefully in her home on June 30, 2019. She was born in Belgern, Germany to Hugo and Sophie Tilch. She is survived by her four children, Denise Anker and Steven Anker of Big Oak Flat, Kim Anker Paddon of Big Oak Flat and Los Angeles, and Conrad Anker of Bozeman, Montana; her daughters-in-law Jennifer Lowe-Anker and Cecil Cole Anker; her grandchildren Lydia, Denise and Molly Paddon, Max Lowe, Sam and Isaac Lowe-Anker, and Olivia, Sophie and Ben Anker; a large extended family, and many lifetime friends. She was predeceased by her husband of 55 years, Wallace R. Anker (Wally) in 2010, her brother Paul Tilch, her sister-in-law Ann Anker Coldsmith, and her son-in-law Richard L. Paddon.

Helga was raised in the town of Torgau in eastern Germany and immigrated to the United States after marrying Wally Anker in Berlin, where he was a graduate student and she was working as a bacteriologist. Helga and Wally lived in cities throughout the US and around the world. Helga was known to say she had moved her family 26 times during Wally’s tenure in international banking. Her final move was to Priest Ranch after Wally’s retirement in 1985.

Helga was an active volunteer in the community, working at Helping Hands and serving as a docent and Board member of STCHS for many years. She loved to garden, play bridge, create needlework art, and care for her extended family and friends. She also took great joy in her dogs and animals on the ranch. She and Wally continued to enjoy travel and visited operas around the globe, the longest association being with the San Francisco Opera, which she attended shortly before her death.

In her last years, Helga took pride in doing all of the baking for the family restaurant, Priest Station Caf managed by Steven and Cecil. She had also helped with baking desserts for her daughter Denise’s new restaurant, The Lucky Buck in Buck Meadows.

A memorial service is scheduled for 2:00 on October 12 in Mary Laveroni Community Park in Groveland.

In lieu of flowers, donations may be made to a charity of your choice or to Vichara Monastery, 10049 Ernst Road, Coulterville, CA, 95311.