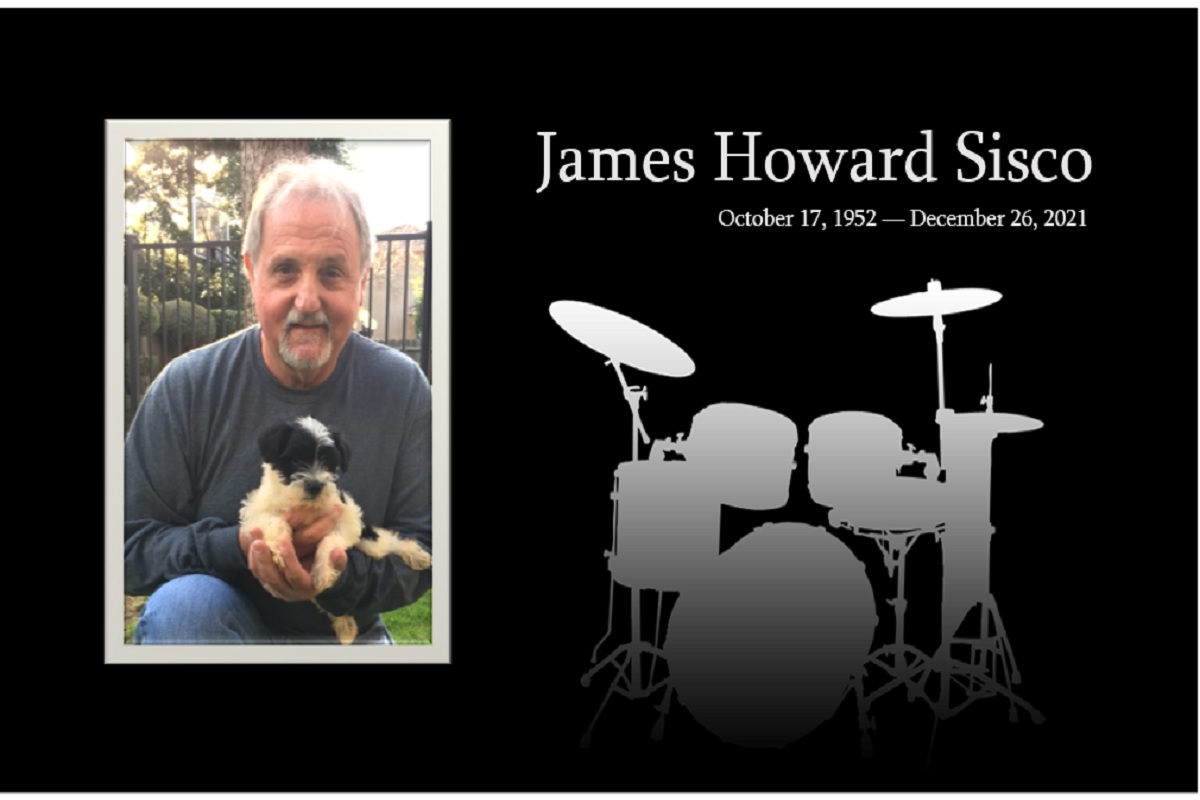 James Howard Sisco (Jim), born October 17, 1952, climbed the Stairway to Heaven on December 26, 2021. Always a fan of classic rock, he’s no doubt playing drums with his favorite music idols in the spirit in the sky.

James, son of Howard and Elvera (Vee), was a lifetime resident of Turlock, Ca, attending Sacred Heart Elementary School and other Turlock schools as a youth. He often helped out at his mother’s flower shop, the much adored Turlock Flower Shop. James grew up admiring his older sister Lynette, and the two shared an unbreakable bond through life.  Always a pinball wizard, he was known to ride his bike around town with his cousins Greg, Alan, and Lee Marchant, and Mike and Nick Zanos to play all the different pinball machines.

James would eventually graduate from Turlock High School, class of 1970. There, he made lifetime friends with an amazing group of colorful buddies. His teen years were punctuated by his appreciation of the music and culture of the time. James loved to play drums in garage bands, and would also attend concerts for legendary groups that would make even the most seasoned rock fan jealous.

After attending further schooling at Modesto Junior College, James would eventually find himself at Turlock Irrigation District, a company that would serve him well and he would work for for over 30 loyal years, ascending his way up from a meter reader to the important roll of Control Center Operator. (Those reading might not realize how often they were close to a power outage that James would skillfully prevent.)

In that time period, he would meet the love of his life, Vickie Pantazopulos, to whom he would be married for nearly 24 wonderful, love-filled years, before her untimely passing at 45 years old. During their early years together, James became very close to Vickie’s large family, and he quickly realized his life would become much more loud around the 5 lively Pantazopulos sisters and their husbands. James and Vickie had two children, Jimmy and Kirsten. They loved the pair dearly and spoiled them to no end, teaching the two how to be kind people and always offering a loving, helping hand every step of their way toward adulthood. After Vickie’s passing, James devoted his life to Jimmy and Kirsten, working long hours to provide a very comfortable life, but also finding the time to help with homework or teach his children about the wonders of classic rock music.

James was known for his love and near-encyclopedic knowledge of The Beatles, but he also had an appreciation for the many other bands from the time period, and a record would always be spinning on his player. His love for classic rock was bestowed upon his son Jimmy, and the two together proudly bonded by attending many amazing concerts. James also continued drumming throughout his life, often jamming with his friends into the late hours of the evening. Beyond music, James was a lifetime diehard fan of the San Francisco Giants and 49ers, and he had a deep fascination with Fantasy Football, winning one championship in Toe-Jam Football League. He was a voracious reader and crossword-puzzler, and his favorite TV shows were Breaking Bad and Better Call Saul. However, James’ favorite activity might have been spending time with his best bud, his miniature schnauzer, Lenny, taking walks around the neighborhood and meeting with his neighbors and friends.

James was lucky enough to know the joys of being a grandfather, as his granddaughter, Stevie Moser, entered the world in April of 2021. His children and grandchild were truly the most important aspects to him in his life.  He will be missed but his love will forever be felt here, there, and everywhere. May he walk along the strawberry fields forever.

He was predeceased by his wife, Vickie; and is survived by his children, Jimmy (Erika), and Kirsten Moser (Bobby); his granddaughter, Stevie; his sister Lynette Souza (Ray); niece Jaymi Barandica (Robert); and his dog, Lenny. Rock on, James!

A rockin’ celebration of life will be held on Friday, January 14th at 10:00 am at Allen Mortuary in Turlock, CA. Reception to follow. Let’s celebrate James the only way we know how “” with a groovy good time.

Those who are not able to attend in person can watch the service online with the following link: https://www.viewlogies.net/allen/M5ZodiLuR?pin=551160 Enter the pin: 551-160 when prompted.