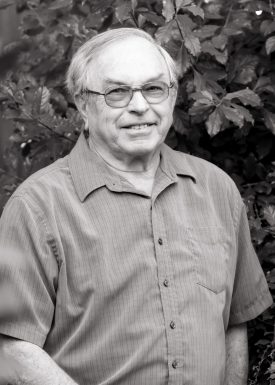 He was born in Fresno, CA, May 29, 1938, to Ellen Stevens and David Melvin Foster. He graduated high school in Fresno, CA, and went on to serve in the armed forces as US Army Signal Corp-Field Radio. He met his beautiful wife while both were working at MARS Drive-In, in Fresno, CA, and they became engaged. They wrote letters back and forth while he was stationed in Germany, and were married on December 15, 1962. They had their first child in 1964, a son, and were blessed with three more throughout the following years, all daughters.

He continued to work hard and advanced his career in broadcast engineering with jobs at KICU-TV Visalia, KMJ-TV Channel 24 in Fresno, and as Chief Engineer at KLOC-TV, Channel 19 in Modesto, CA. He attained all of this without a college education, through his thirst for knowledge, self motivation, capabilities, and merits. He credited the Lord’s guidance and a couple of encouraging mentors for their role in his successes.

In March of 1981, he accepted employment at California State College, Stanislaus as Television Engineer. He was recognized for his great work in establishing the electronic link between Stanislaus State college and Sonora to bring upper division distance learning to Sonora’s Fairview Office Building. He also assisted California State University, Sacramento, in 1984, to meet their FCC compliance obligations. He was one of the pioneers in the field of distance learning.

He officially retired from California State University Stanislaus in 2002, but continued to work there part-time until 2010. He remained active in the community, volunteering for the Turlock Police Department and becoming a lifetime member of the Madison Society Foundation. He loved serving his church, and he worked on the security team. His hobbies included photography, “trouble-making,” shooting guns and training others to use guns safely. He enjoyed gospel music, big band and Jim Reeves.

Most importantly, Loren loved his Savior, the Lord Jesus Christ. His wish was that all would seek a relationship with Him, and find a saving knowledge of Christ. He dearly loved his wife, his children and their spouses, his grandchildren, and his nieces and nephews. He was a steady rock, always available when needed, a prayer and spiritual warrior, and a hero to his family. He finished the race, kept the faith, and was victorious in Christ.