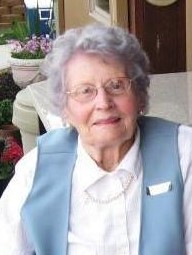 Marge grew up on her parents’ walnut and chicken ranch in Patterson. She enjoyed playing the piano, swimming in the Patterson HS pool, riding her bicycle and making lifelong friends. Marge graduated from Patterson HS in 1943 and kept in touch with many of her girlfriends. When they were in their 80’s they called themselves the 80’s Ladies.

Marge worked at Patterson Frozen Foods and Guayule Farm in Vernalis. During WWII she instructed others about gas masks at Camp Parks in Dublin.  She joined the USO and became friends with Gene Green who arranged a blind date between her brother Don and Marge. When Don was discharged from the US Coast Guard he and Marge dated for 8 months before getting married November 9, 1946.

Marge also worked at the Army Depot in Stockton, Bank of America Modesto, and at JS West on 9th Street for her Uncle Harvey Benson. In 1947 Don and Marge started Riverside Cabinet Shop where she would finish sand cabinets and hinge doors.

Marge and Don enjoyed traveling and camping in their travel trailer. They traveled the lower 48 states and Canada. They often traveled with her brothers and sisters-in law Stuart & Betty and Richard & Marylyn, and his sister Gene and her husband Andy. Their favorite place was Sea Cliff State Park in Aptos. Marge and Don painted many oil paintings, and she enjoyed sewing and doing crafts with their daughter Nancy Diane.

In 2011 Marge and Don moved into Dale Commons Senior Living. After Don passed away in 2015 Marge remained there until 2017 when she moved to Valley Comfort.

Marge was preceded in death by her parents, Walter and Marguerite, her husband of 68 years Don, their dear daughter Nancy Diane, and Marge’s brothers Stewart and Richard and several cousins.

A memorial is scheduled at Grace Lutheran Church 617 W. Orangeburg Modesto, CA on August 24, 2019 at 10:00 AM.  Burial will be at San Joaquin National Cemetery in Santa Nella.

Donations may be made in her memory at http://main.nationalmssociety.org/goto/MarjorieMargeAnnSorensenGreen

Thank you Chris and Nick and your staff at Valley Comfort, and the staff at Dale Commons, for your tireless care of Marge and Don.

Thank you Community Hospice for your loving care.