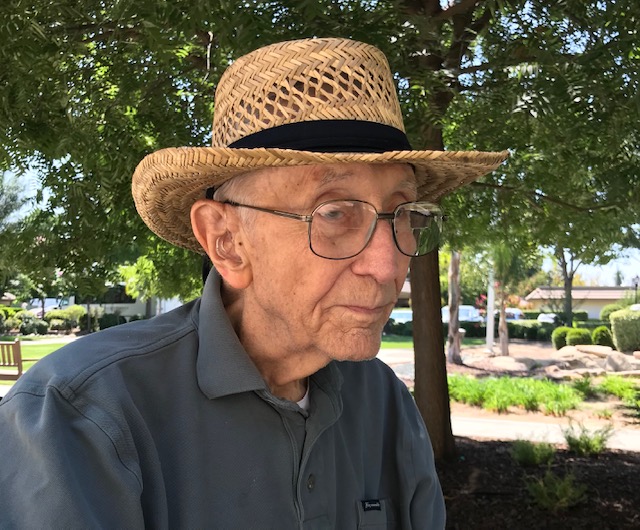 March 1920 ~ December 2019_x000D_
_x000D_
Maurice Down wanted to be of service to others””his church, boy scouts, but most of all to his family. And his favorite way of doing that was keeping busy building things or being outdoors. He would have been one hundred years old in March.

Maurice was born and had a happy childhood in Sewell, Chile, a mining town where his father was the superintendent of the milling production.  He came to the US when he was seventeen to go to Pasadena College, and later graduated from UC Berkeley.  He met his future wife Ruth Carlson there.  As a dual Chilean/British citizenship he became an officer in the RAF of a group which serviced radar equipment on planes. Radar was one of the deciding technologies that allowed the Allies to win the war. He loved doing meaningful work and the camaraderie.

After the war, he worked as a supervising engineer for the telephone company in Los Angeles and San Diego, and was instrumental in getting them to change from analogue to digital machines in the 1980’s.

Although he did well in college and career, Maurice was happiest when he was working with his hands.  He built three homes and remodeled a fourth in his spare time. In 1955 he was in charge of building the Methodist Church in Tujunga near Los Angeles.  On a visit 30 years later he was introduced by another old timer as the one who was responsible for them having the building they did. His six year old grandson couldn’t have been prouder.

Maurice was a leader in two Boy Scout troops in Los Angeles, and started Troop 319 in La Mesa, Calif.

Family was the most important part of Maurice’s life. Ruth was the love of his life and his easy going style was the perfect foil for her dramatic flair.  They raised their children with love and discipline. As a father he was strict and serious, but went back to being more easy going once work and family responsibilities were lifted.

He gave incredible gifts to his children. He was easygoing and had joy in life. He was calm and supportive although he expected the best from his children. He shared his love for the outdoors–camping and backpacking.  He was thrifty and had his financial affairs in order. He was a good parent, and was generous with time and money for his grandchildren.

He is survived by four children, Norman Down, Rolene Walker, Carl Down, and Kathy Down.  Also a son in law, Gregory Kelly, and two daughter in laws, Lisa Down and Jacki Challenger.  He is survived by seven grandchildren: Serena Down, Jake Down, Raqa Down, Dylan Otero, Martin Otero, Brigitte Kelly and Randy Almond.  He had five great grandchildren, Finn and Noa Beveridge, Vivian, Lucas and Dylan Otero.

He lived in Los Angeles and San Diego and retired to Covenant Village in Turlock. He also spent time at a cabin they built in Bayview, Idaho.

Due to current circumstances the memorial service for Maurice has been delayed.  Please keep checking for additional information.