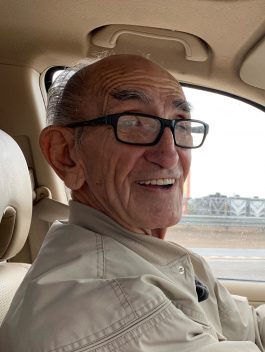 Richard was born in New Bedford, Massachusetts and grew up Gustine and Oakland, California. He spent the last 15 years of his life back in the Central Valley, Modesto and Turlock. He worked as a sheet metal fabricator for numerous years and ran his glass design and installation business until his retirement. Richard was incredibly skilled in construction and fabrication. There was nothing he could not fix or create. He enjoyed camping, cycling, studying his Bible, and teaching and serving at his church. He volunteered extensively in the community and had a tender heart for the downtrodden. Richard was a joyful man who savored conversation on any topic, but especially controversial ones. He loved his family, his friends, and all who God led into his path. He will be sorely missed.

He is survived by his wife Zella Coleman; children Damian Cabral of Fairfield and Sherry Luiz of Tracy; siblings Eileen McGuire of Modesto and Robert Cabral of Turlock; seven grandchildren and four great grandchildren.  Richard was preceded in death by two siblings Barbara Cabral and Joseph Cabral.

Private services were held.  Please share your memories at www.AllenMortuary.com