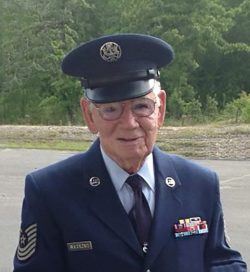 Dick’s life began in Turlock on August 15, 1929. Dick attended both Turlock and Oakdale schools where he starred on the wrestling team.  Dick went on to graduate from Hilmar High School where he participated in track and football.

After High School Dick served in the US Military for 20 years.  During his military service, he served his first four years in the US Navy and the remainder of his active duty was served in the US Air Force. During Dick’s military career he had many accomplishments where he worked on some of the most important aircrafts used in the Korean War. While in the Air Force, he was also involved in launching the first satellite into orbit with NASA. Richard retired in 1970 as a Master Sergeant in the US Air Force.

After retiring from Air Force, Richard and his wife Velma, who he was married to for 61 years, settled into the Hilmar community. Throughout Dick’s adult life he was a faithful supporter of Hilmar High Athletics. He was well known in the community as a consistent fan at any given Hilmar High School athletic event. The community recognized Dick’s dedication by inducting him into the Hilmar High School Hall of Fame in which he was the inaugural inductee. Dick never met a stranger and loved helping people. Some of Dick’s hobbies included water skiing, camping, traveling and spending time with his family.

Dick is preceded in death by his wife Velma Faye Watkins. He is survived by his two daughters and their spouses Kelly and Kurt McKenzie and Christi and Rick Golden; his four grandchildren and their spouses, Danielle and Scotty Link, Courtney and Alex Michael, Brian and Amelia Golden, Kristin and Billy Davenport; and his three great grandchildren Rylee, Avery, and Carter Michael.

In lieu of flowers, memorial donations can be made in memory of Dick Watkins to Hilmar High School Athletics, 7807 Lander Ave, Hilmar CA 95324.

A graveside service with military honors will be held at Sunnyside Cemetery in Stevinson on Saturday, March 6, 2021 at 11:00a.m.