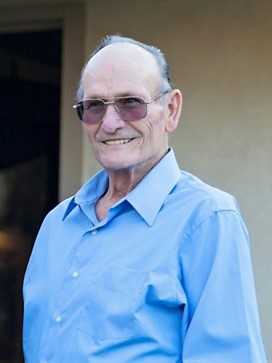 Working at a gas station and attending the Army Reserves, he eventually got a job with Western Vendors (a vending machine company) in 1961, where he worked his way to supervisor and after 17 years of employment his Dr. warned him to slow down or he’d risk having a heart attack. At that point he and his wife sold their property in Simi Valley, Ca and bought a place by the Merced River in Winton, CA, where they ran a business for 4 years after which they closed it and remodeled it to make it a home for them and their 5 children for 30 years.

At that time Rod took a position with Foster Farms where he quickly became a maintenance manager. While living by the river, he raised many animals – horses, pigs, chickens, ducks, goats, dogs, cats, and anything else that happened to stray in on his little “farm”. He and his family enjoyed the animals, land, as well as the large gardens that were planted every year.

Rod loved spending time with his family. He coached little league baseball for years, when his kids were older he started umpiring for Merced City until he couldn’t get around as well. In 2000 he was diagnosed with congestive heart failure and a deteriorating heart. He was placed on the heart transplant list for 7 years, after which he was removed because he had responded so well to medication and a stringent diet that he was doing very well.

Rod didn’t stop! Taking up making yard art and putting up decorations (that he made) for the holidays, golfing, and bowling; he loved to bowl and did so right up until the day before he went into the hospital.

Rod is preceded in death by both his parents (Martin & Cecil Hoofard) and by two of his sisters (Marie Hopkins and Jackie Bowser). He is  survived by his loving wife, Kay Hoofard, his 5 children, Kathie Barber (Doug), Timothy Hoofard, Karen Hoofard (Mike), Robert Hoofard (Mindy), and Kirsty Hardwick (Brad), his 8 grandchildren, Jason Moore (Tiffany), Brandon Hoofard, Kirissa Sommerfeld (Jesse), Kyle Hardwick, Dallas Hoofard, Kayla Hardwick, Dalton Hoofard, Logan Barber; his 4 great grandchildren Chloe Moore, Lily Hardwick, Phoebe Hardwick, Tyler Russell Jr., his brother Martin “Morris” Hoofard (Bonnie), two sisters, Marg Aling (Al), Gwen Riddell (Bud), and a multitude of nieces and nephews. All of which were loved dearly by him and will be greatly missed by all of us. He was one special man with a great smile and personality to match.