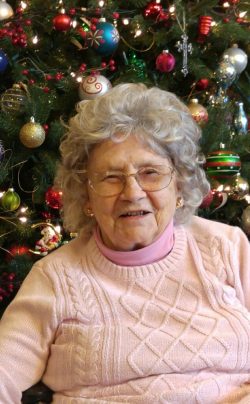 Wilma Carson, beloved wife of Vern Carson, passed away June 23, 2020 at the age of 87. Born Wilma Jean Thiessen, October 15, 1932, in Ingalls, Kansas, to Jacob Enns Thiessen and Theo Nettie Jane Thiessen (nee Smith), she was the youngest of Jake and Theo’s seven children.

The Thiessen family moved from Kansas to California in 1936 when the Dust Bowl blew the family farm across the plains. They drove to the San Joaquin Valley and found work in the orchards and fields. Jake was soon able to buy thirty-three acres of his own in Hilmar, just south of Turlock, where he planted crops and had a small herd of dairy cows. Wilma grew up in the family home Jake and Theo built on the farm.

Wilma was always ambitious and hard working. At age fifteen she got a provisional driver’s license so she could drive to work in Turlock where she was a dispatcher at her brother-in-law Fran Pike’s taxi company. Soon after that she donned the uniform of a nurse’s aide and went to work at Emmanuel Hospital. She loved taking care of patients and she continued to work in hospitals and doctor’s offices the rest of her working life.

Wilma was still only fifteen when she met the love of her life, Vern Carson. He dropped by the taxi office on an errand and almost as soon as they met they fell in love. They eloped a year later, July 9,1949, and started married life in Oakland where Vern was attending college. They later moved to Stockton and then to Turlock where Vern built a house for their growing family.

They were blessed with two daughters and two sons, Cheryl, Daryl, Rick and Valerie . The family lived in Turlock for twelve years and then moved to Chowchilla. Where Vern managed the Chowchilla Water District and Wilma worked part-time at the local hospital.

The great adventure of their lives began when Vern and Wilma met the Navigators in the early 1960’s. They launched a home-based ministry to service people at Castle AFB and Lemoore NAS. As a result there are a lot of people who still think of Vern and Wilma as “mom and dad,”but here is how we Carson kids will always remember our mother Wilma:

So pretty, so loving, so full of faith and integrity. So mischievous when she wanted to be, so ready to laugh and it took so little to make her laugh!

The quintessential hostess, she always had enough beds, pillows and blankets for everyone who dropped in. Always plenty of delicious food, abundant desserts, snacks and a full cookie jar.

Everything she did was done with other people in mind. She thought, “How will I share this?” “Who else would enjoy this?” Her storage shelves were full of extra paper plates, napkins and cups, always ready for a party.

When family came through the door she lit up like a Christmas tree! She played board games and dominoes just so she could get everyone around the table laughing and talking.

She loved to travel, but seldom felt the need to go far. “We have every kind of scenery in California. Why go anywhere else?”

For her and Dad traveling in an RV was the perfect vacation. Mom had her kitchen with her, they had their comfortable bed to sleep in, and they could invite people inside, just like home. Even their vacations were shared with other people.

Mom and Dad were Christ followers who truly delighted in God and they wanted to share their faith. People who came to our home couldn’t help but meet Jesus. He was introduced to them at the table, in the living room as Dad preached and taught, and at picnics where the football was tossed around and people talked about faith. Hard questions were asked and answered. People received prayer and lives were changed forever.

And Mom was the engine that kept it all running. Oh, she loved people! And, oh, she loved the Lord!

So when he came to take her home the night of June 23 we know she was glad to go. She had been looking forward to being with Jesus and the uncounted number of friends and family already there.

We think she stopped to give Dad one last touch. He was her beloved husband of almost 71 years. They were pals, lovers, partners, and inseparable souls. She wouldn’t have left without saying goodbye. Maybe it’s just imagination, but we like to think it was her sweet farewell that woke him to discover she was gone from the quiet room they shared.

And now she’s running and laughing and loving life again. We miss her, but we feel her near.

Wilma was preceded in death by her parents, six siblings and their spouses, and her dearly loved son Daryl who passed away 1991. Wilma’s memorial service will be held July 10, 2020, 10:00 a.m. at Allen Mortuary in Turlock.