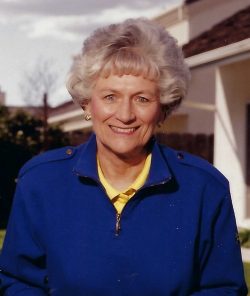 September 1925 – January 2020_x000D_
_x000D_
Miriam Ness, age 94, formally of Modesto and Turlock, CA, went to be with the Lord on Thursday January 9th, 2020 surrounded by her family. She was born to the late Harold and Constance Goodwin on September 15th, 1925 in Victoria, British Columbia, Canada the youngest of five children.

Victoria was a small idyllic city during her growing up years.  She spent hours riding her bike all over: to school, parks, church, beach and the harbor area. The spectacular Butchart Gardens was free then and open to the local citizens. Her family picnicked in the gorgeous surroundings often.  Her family was very active in the ministry of Glad Tidings Church and her mother was known for her entertaining skills.  Their home was filled with guests constantly.

Miriam attended college in Wheaton, Illinois, Winnipeg, Canada and Seattle, Washington. During those college years she met the love of her life, Rev. Theodore (Ted) Ness, and married in December of 1947 in Victoria. Miriam joined with Ted in his ministry for the Assemblies of God as a pastor and a short-term missionary as they traveled the world together and lovingly shared the Good News of Jesus Christ to all those around them.

During the early years of her marriage, they pastored churches in Moline, Illinois, Winnipeg, Canada, Detroit, and Cleveland.  Miriam supported her husband in his work while being an active stay-at-home mother to their four children.

In 1968 Ted and Miriam moved their family to Modesto when Ted became the senior pastor of the former Bethel Church (now One Church).  They loved their years of ministry in Modesto and through it gained many lifelong friends. During that time period, Miriam successfully established herself as a real estate agent for Vinson Chase at Century 21 and Coldwell Banker for about 10 years.

While still living in Modesto, Ted accepted first the interim pastorate at the former Bethel Temple (Harvest Christian Center) and eventually the senior pastor’s position.  Ted and Miriam grew to love and enjoy the congregation of Bethel Temple and the opportunity for ministry in Turlock.

Then moved next to Fresno because Ted accepted a position as a staff pastor at Peoples Church under Pastor G. L. Johnson.  Besides being actively involved with Ted in his ministry, she served as the Women’s Ministry Director, also.  Their time in Fresno was another highlight in their lives because of the people.

Heading into their semi-retirement days, they bravely ventured out as interim missionaries in Western Samoa and Greece and loved that experience.

For retirement, Ted and Miriam decided to settle in the Turlock community where they continued to minister through teaching, preaching and Bible studies or wherever they were needed.

Through her constant love of her Lord and Savior, Miriam became a loving mother, wife and homemaker. Miriam was remarkable at entertaining, cooking and decorating. She had a great love for gardening, too, an inherited trait from her father who always had a beautiful garden.  She loved designing and spending hours in her gardens. Her greatest joy though was to create a beautiful, warm, welcoming home for her family and friends. She along with Ted, were always hospitable and welcomed anyone who walked through the doors of their home. A lot of fun, laughter, good conversation and prayer happened within the walls of the Ness home.

Miriam cherished her children Sue-Ann Anderson (Randy), Ted Ness (Janet), Sharon Christie (Greg) and David; her grandchildren Johanna Atwood (Jonathan), Juliet, Matthew, Jennilie, Jillian, Michael, Ryan and Tyler Ness and Gregory, Robbie, and Erin Christie and great granddaughters Mila and Poppy Atwood. She always considered her family, her personal ministry. She loved being a grandmother; it brought her such joy to attend to her grandchildren and great grandchildren.

Miriam is preceded in death by her husband Theodore Ness and grandson Teddy Ness. The family wishes to thank all of those who cared for her during her last days.

For those who have known Miriam during her wonderful and beautiful life, there will be a graveside service Friday January 24th, 10:00 a.m. at Turlock Memorial Park, 425 N Soderquist Rd., Turlock, CA where she will be buried next to her loving husband. A memorial service will follow at One Church, 2361 Scenic Drive, Modesto, CA, at 12:00 p.m.

Any memorial donations in her memory may be sent to One Church for the Assemblies of God Retired Minister and Missionary Fund.