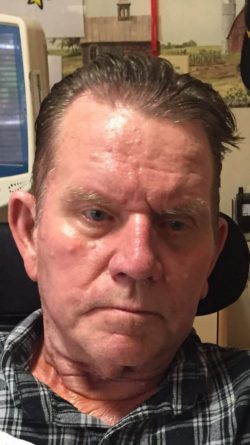 April 1947 – Sept. 2018_x000D_
_x000D_
James Michael Poley passed away after a twenty-five year battle with Parkinson’s disease.  Mike was born in Hernando, Mississippi to Hal and Fanny Poley.  Mike enlisted in the Army and his training consisted of code of conduct, military justice and basic airborne training.  Mike’s rank was a Specialist 4 and he earned the Army Commendation Medal, Combat Infantryman Badge, National Defense Badge, Vietnam Campaign and Service Medals and a Parachute Badge.  He was honorably discharged in 1968.

Mike started his career in Houston, Texas at Flour Daniel Construction.  He was eventually transferred to Modesto to work on the Proctor and Gamble plant.  When the plant was finished, Mike went to work at Lawrence Livermore National Lab and eventually became a full time employee.  Mike continued his career at Lawrence Livermore Lab for over 23 years.

Mike was preceded in death by his parents and his two brothers, Hal and Tommy.