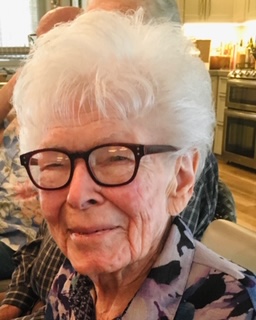 June 30, 1923 – April 10, 2020_x000D_
_x000D_
Jeune Dorothy Johnson Lindquist was born to Gottfried & Ruth Johnson on June 30, 1923 at Emanuel Hospital in Turlock, California. She was the third child of eight siblings: Stanley Johnson, Florence Johnson Davis, Elwood, Merlyn, Bertyl, Vernon and Richard Johnson. She was preceded in death by her parents, and siblings Stanley and Florence. She attended Hawthorne Elementary School and Turlock High School, graduating in 1941. Jeune received her Associate of Arts Degree from Modesto Junior College and she also attended the Bible Institute of Los Angeles.

Jeune married Wallace Lindquist, also of Turlock, on June 23,1951 at Beulah Covenant Church where they were members. They welcomed four children:  Peter, Jan, Dawn and Tim Lindquist. Jeune was a full-time homemaker along with serving in her community through Meals on Wheels and the Emanuel Hospital Auxiliary. As a charter member of Monte Vista Chapel, Jeune served in Good News Clubs, nursery and childcare, Sunday school teacher and Shut-in Visitation. Along with Wally, Jeune was instrumental in faithfully welcoming new people to Monte Vista Chapel through the Discovery Class. She also sang in the choir, counted the offering, served on the Funeral Committee, and most importantly, she was always available to meet with people. This act of service was a remarkable testament to Jeune’s deep faith.

Jeune and Wally celebrated 37 rich years together before Wally’s passing in 1988. Her next years were spent living with family, which allowed her to be very involved in their lives. She welcomed Jan [Peter], Sheri [Tim], Frank [Jan], and Dennis [Dawn] as her own, along with eight grandsons: Andrew, Daniel, Jordan, Ben, Caleb, Issac, Micah, and Nehemiah Lindquist, a grand daughter-in-law Michele [Andrew], and 5 great grandchildren.  Jeune loved to play games, celebrate birthdays, taco nights, traveling, reading and especially her deep abiding faith in the Lord.

Eventually, health issues required Jeune to move into a more secure environment. She resided at Paramount Court, Saint Thomas Retirement Center and Grace Home. Through many challenging transitions, Jeune faithfully sought God as her source of comfort and peace. Her example of releasing her demands and accepting her new circumstances remains a great legacy for all who knew her.

Even the Corona Virus didn’t have the power to harm Jeune. In her final month of isolation and no visitors, she held her Bible, favorite verses, and her dearly beloved photos, naming her family one by one as she prayed.

On Good Friday April 10, 2020 we celebrated the home-going of Jeune Dorothy Johnson Lindquist. Her frail shell has been transformed and she is fully alive with Jesus. Jeune is now truly “sheltering at home”.

In lieu of flowers, memorials may be made to:

We look forward to celebrating together Jeune’s life at a later date.