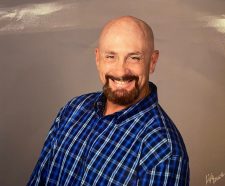 Sept. 1967 ~ Dec. 2020_x000D_
_x000D_
Larry James De Rossett, Jr. (Jim) passed away unexpectedly on December 30, 2020 in Turlock, California.  He was born September 24, 1967 in Jefferson City, Missouri to Larry James De Rossett Sr. and Connie Horton De Rossett.  He spent the first 11 years of his life in Eldon, MO, then the family moved to Walla Walla, WA and then later to Turlock.  Jim played football and sang in the concert choir in High School.  He worked on the Tyson fishing boats out of Seattle for a couple of seasons.  Jim was a long haul truck driver, drove a concrete truck and did construction work.

He enjoyed fishing, country music and loved to work.  He was a member of Geneva Presbyterian Church in Modesto.  Jim’s good friend, Pam, said “He was a great man and could do anything.”

Jim is survived by his parents Larry and Connie, aunts, uncles, cousins and many friends.