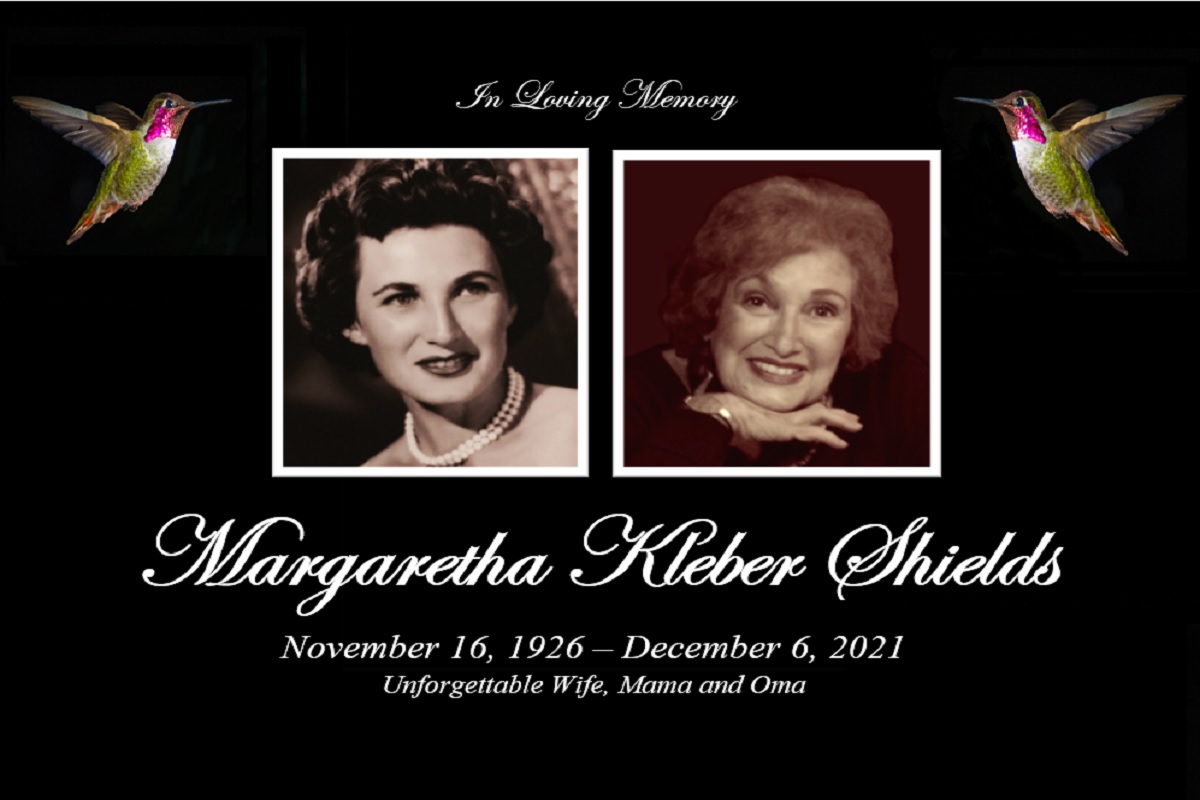 The final hummingbird flies toward the skies, she wished not to see yet another December 9th, so on December 6, 2021, we bid goodbye to the lady who lived in her eyes.

Margaretha Katharina Magdalena Kleber, known to everyone as Margaret was the eleventh of sixteen children born to the late Josef and Maria Scheiblbrandtner Kleber in the village of Bruck an der GroÃŸglocknerstraÃŸe, Austria on the feast day of St. Margaret of Scotland, for whom she was named on November 16, 1926. In a family of mostly blonde-haired and blue-eyed a brunette with green eyes came as quite the surprise.  Her siblings always teased that she was left by the Gypsies.

“Gretie,” as she was called in her early days, had an idyllic childhood the first eleven years of her life.  She attended Catholic School where she was known as the social butterfly who was frequently chastised by the nuns for talking in class.  Her best friend in the entire world was her younger sister Theresia, known as “Resi.”  Gretie and Resi got into a lot of mischief together, with Gretie being the instigator of most of the schemes which got them into trouble.  Her childhood changed forever on March 12, 1938, during the Anschluss when the Nazis invaded Austria.  The Kleber family did their best to maintain a normal life.  Gretie developed into a glamourous beauty, who was crowned Miss May Day.  This officially making her a beauty queen.

As “The Second War,” as Margaret frequently called it, escalated and her older brothers Josef, Georg, Johann, and Anton were forced into military service, she finished school and hoped to work in the fashion industry as a designer.  The family suffered a major tragedy when eldest brother Josef was killed in action in Norway in 1942.  As the war came to an end, Gretie, welcomed her first daughter, Sonja in January of 1946.  Following the death of her father Josef in 1947, Gretie worked at the Caf Winkler in Salzburg, Austria.  In December 1949 a newly married Gretie set sail for the United States, leaving Sonja in the care of her sister Resi until she could plan to send for her.  She sailed first class on the S.S. De Grasse and became one of the last immigrants to go through Ellis Island upon her arrival, December 22, 1949.

“˜Greta,’ as she was now known, settled in Modesto in 1950.  She purchased her first home at 2243 Carol Street.  After being reunited with her daughter Sonja, Greta welcomed her second daughter, Linda, on August 19, 1951.  Linda would become the first member of the Kleber family born in the United States.  In Modesto, Greta met a group of German immigrants who would become her lifelong friends and sisters of the heart, Ellen Miner, Gerda Beckstein, Margarethe Gates, and her closest friend of sixty years Margunde Robinson.  She threw the baby shower for Margunde when her daughter Denyse was born in 1955.  Denyse Robinson, and Margunde’s other two children Roswitha and Frank spent the next sixty-six years never doubting they had a second mother in Greta.

Greta became a United States citizen on June 20, 1956.  Finding herself a young single mother, Greta worked very hard to support her family.  She worked as a German interpreter at the Bank of California and waited tables for her friends Ellen and Dale Miner at the Office Lounge and the King’s Bench.  She worked many years at Sabella’s Restaurant but spent the bulk of her professional life working for the Galas family at the Sundial Lounge.

On October 11, 1963, witnessed by her best friends Margunde and Edmund Robinson, she married Richard Shields in Carson City, Nevada.  From that day forward Margaret Shields was her preferred name.  In 1975, she welcomed her first grandchild, when Sonja gave birth to a little girl named Teresa.  In 1983, Linda presented the first boy of her family with the birth of grandson David.  Teresa and David maintained an unbreakable and special bond with their “˜Oma’ (grandmother) until she took her final breath.  Linda gave birth to a final grandson named Matthew in 1985.  Being an Oma gave her the greatest joy of her life.  Margaret was an excellent chef and hostess.  Her Austrian delicacies were enjoyed by her entire family.  Though she taught her recipes to her children and grandchildren no one will ever be able to figure out her ability to salt food with her usual touch of magic.  In 2003, Margaret became a great-grandmother when Teresa gave birth to a little boy named Lance.  In 2006, her family was complete when Teresa had a little girl named Juliana.

Margaret and Richard enjoyed travel and visited Margaret’s native Austria several times over the years.  They were active members in the   Der Orden der Hermanns-Soehne German Lodge for many years.  The Shields greatest joy was their evenings entertaining their best friends the Robinsons, the Miners, and Rose (Lloyd) Gustafson.  Cocktail hour at the Shield’s home bar was the place to be.  Richard Shields passed away December 21, 2015.  The last thing he saw were his wife’s beautiful green eyes as he said goodbye to the woman he referred to as “The most beautiful woman in real life.”

Margaret’s greatest heartache came on December 9, 2018, when her daughter Linda passed away.  Our hearts are full knowing they are once again together and assured our family has the most vigilant heavenly beauties watching out for us.

Left to mourn the lady who lived in her eyes is her daughter, Sonja (Steven) Sher, her grandchildren Teresa (Adam) Fiss, David Seymour, and Matthew Seymour; and great-grandchildren Lance and Juliana Fiss.  She leaves her brother Engelbert (Theresia) Kleber and her sister-in-law Anna Kleber of Austria.  She leaves many nieces and nephews who stayed in touch with their Tante Margaret and called her regularly.  She is also survived by her son-in-law Michael Seymour and her bonus children Roswith Corazzini, Frank Robinson, Denyse Miller, and Linda Lowe.  In addition to her parents, husband, and daughter, Margaret is preceded in death her brothers, Josef, Georg (Paula), Johann, Anton (Johanna), Stefan, and Hugo (Anna) as well as her sisters, Regina (Anton) Falkner, Maria (Hubert) Hanl, Susana (Alois) PÃ¶tzelsberger, Julianna (Friedrich) Derflinger, CÃ¤cilia (Gustav) Voltmer, Elizabeth Kleber, Theresia (Alfred) Ziegelwanger, and Christine Kleber.  She was also preceded by her best friends and fellow hummingbirds, Ellen (Dale) Miner, Gerda (Hans) Beckstein, Margarethe Dzierla, Rose (Lloyd) Gustafson, and Margunde (Edmund) Robinson.  The family would like to thank those who cared for our beloved Mama and Oma in her final years and days especially, Trudy Lindsay, Emily Sanchez, Judy Claycomb, and Ruby Rodgers.

Services for Margaret will be at 4:00 pm on December 18, 2021, at Allen Mortuary, 247 North Broadway, Turlock.  For safety reasons we ask everyone to wear a mask, but in accordance with the style of Mrs. Shields the mask should match your shoes!  Burial is private.  Please make any donations in Margaretha Shields’ name to the McHenry Museum & Historical Society, 1402 “I” Street, Modesto, California, 95354.

With her beloved daughter Sonja at her side and in the arms of her devoted grandson, David the most beautiful woman in any room took the hand of her Linda and closed those magnificent green eyes for good.  She belongs to the ages yet is now heaven’s most glamorous angel.  Though we all share the cries, we feel the peace and the blessing to have shared our lives with the beguiling lady who lived in her eyes. Ruhe in Frieden, Liebe Oma!

Margaret’s service may be viewed online with the following link: https://www.viewlogies.net/allen/hw_hmxqDg?pin=847496

To view the obituary of Margaret’s daughter, Linda Annette Seymour, follow the link below: