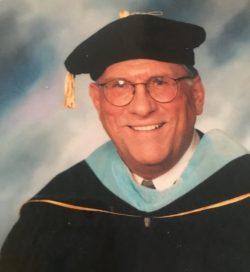 Born on August 29, 1941 in Montpelier, Idaho, his parents, Sylvester Busco and Nathel Ashley, raised him in that same town. Ralph helped his dad work the family business, Busco Produce Co., for many years.

Ralph obtained his doctorate in education and served many years in different leadership capacities as principal and superintendent in various schools in California.

Ralph is survived by his sister, Shirley Hammons of Bartlett, TN and his three children: Steven Busco of Simi Valley, CA, Holly Sanders of Las Vegas, NV, and Kent Busco of Provo, UT. He has eight grandchildren.

Ralph’s memorial services will take place at the Church of Jesus Christ of Latter-Day Saints, Crow’s Landing 1st Ward located at 18601 Crows Landing Road, Crows Landing, CA 95313 on January 18, 2020 at 11AM. Burial will be at the Montpelier Cemetery where he will be buried next to his parents.