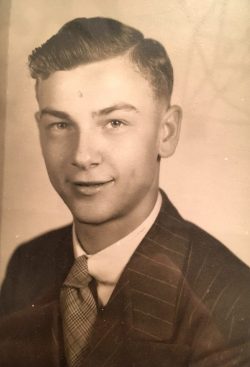 September 1928 – March 2020_x000D_
_x000D_
Thomas J. Hunter was born in Ceres, California and attended Grammar School in Hughson, Denair and Turlock, graduating in 1942.  Thomas started High School in Turlock (about 4 months).  He moved to Modesto and finished High School, graduating in the Class of 1946.

In March of 1947 he went to work for Pacific Telephone Company in San Francisco doing switchboard repair work in Richmond and Pittsburg until October 1950 when he was drafted into the United States Army during the Korean War.

Basic Training was done in Fort Ord.  He was assigned to a telephone school in Fort Monmouth, New Jersey.  From there he was assigned to the Signal Corp and was sent to Camp Gordon (now Fort Gordon), Georgia as an Instructor in the South Eastern Signal School (M.O.S. 3095- Manuel Central Office Maintenance).  Thomas was discharged from Camp Gordon in October 1952.

Thomas returned to Pacific Telephone and went to work in Hayward doing switchboard repair and cross-bar dial maintenance for about three years.  He transferred into Yellow Page sales in Oakland for about five years.  From there he went into forecasting telephone growth in the San Francisco and Bay Area.  The numbers were used by telephone engineers to install more equipment into the dial offices.  He ultimately went into the San Francisco Forecasting General Office and coordinated with all the Forecasters in San Francisco, Los Angeles, San Diego, Sacramento and Reno.  He did this work for 22 plus years.

Thomas retired on June 30, 1982 (35 years and 3 months). Since then he has done a little work in tax preparation, home mortgages and real estate. He left the Bay Area (Belmont) and moved to Twain Harte in March of 1988.