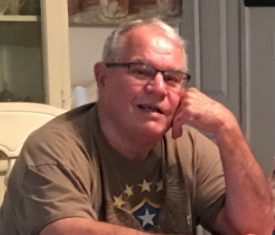 Tom graduated from Los Banos High School, then attended Gavilan College where he played football. He continued his collegiate career at Weber State and finished playing at Long Beach State University. After his collegiate career ended he joined the Los Angeles Police Department and served there for two years before joining the Turlock Police Department. While working for the Turlock Police Department he served in various positions including patrol, detective, SWAT, and Field Training Officer. He received many accolades for recovering stolen vehicles while working with the Stanislaus County Auto Theft Task Force (StanCATT). Tom was a 30+ year veteran police officer when he retired. He continued to volunteer at the Turlock Police Department for several years after his retirement from patrol. In his spare time he would spend it building models of military vehicles, he loved spending time with his family and reading various books about military events in history.

He was a kind and loving husband to his wife Bonnie, a great father to his son’s James and Matthew. He was also a great father-in-law to Matthew’s wife, Erika. However, he was best known as Papa to his grandchildren Uma and Magnus. He  was honor and duty bound when he worked and always fun during his downtime. Tom would often say two phrases that sum him up well, “If you don’t ask, you won’t know” and “All they can do is tell you no”. He always pushed those around him to get better by being a safety net that, if you needed help or advice, one could turn to.

Tom was preceded in death by both his parents, Manuel Souza Vincent and Geraldine Vincent. Aside from being survived by his wife, sons and grandchildren, Tom leaves behind his brothers, Manuel and Michael, his sister Dona and many nieces and nephews.

Per Tom’s wishes there will be no services. In lieu of sending flowers please make a memorial donation in Tom’s name to the American Heart Association.