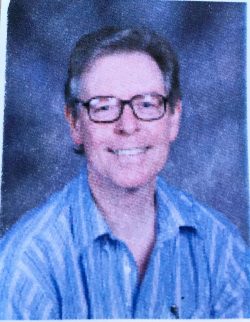 A celebration of life for former school psychologist William “Bill” Koogle, 77, will take place at Calvary Chapel in Modesto Saturday, March 7, 2020 at 11:00a.m.

A native of Arkansas, Bill spent his early years in Oklahoma, Nevada, Oregon and Fresno before moving to Sacramento, where he graduated from high school in 1961.  He was a delivery boy for the Sacramento Bee as a youth and ended up receiving an award for his efforts. He also enjoyed cruising around in his blue 1947 Plymouth coupe in those years, a vehicle he resurrected and drove in the late 80’s and early 90s.

After graduating from high school, Bill joined the Coast Guard reserves.  He then went on to earn an A.A. from American River College where he also participated on the gymnastics team.  He completed his education at Sacramento State where he earned his Bachelor’s and Master’s degrees.

Bill had a variety of jobs while attending college, including serving as a firefighter and as a truck driver for the Sacramento Bee.  After earning his Master’s degree in psychology, he moved to Turlock and served as a school psychologist for the Turlock Unified School District for many years.  He took early retirement in 1999, but after a short time, he returned to serve as a school psychologist in various school districts in San Joaquin County.

Bill was baptized as an adult at Monte Vista Chapel in Turlock.  At that time, he lived in a former church parsonage on West Main Street.  After Osborn Elementary School, teacher JoLynn Johnson, now DiGrazia, had a vision for the under-served youth on the west side of Turlock, Bill opened up his home as a meeting place.  Forty children met there for bible lessons, snacks and games.  That marked the beginning of Westside Ministries which has grown over the last 35 years, now serving 600 children monthly.  During these early years of Westside Ministries, Bill also opened his home to serve breakfast to children and help transport them to church.  One volunteer (and future Wakefield Elementary School teacher) was Linda Partridge, now Koogle, who would eventually become his wife.

The West Main Street parsonage housed an early version of Calvary Chapel Turlock after Bill had moved out of the home when he and Linda were married.  Bill later sold the property to Teen Challenge, and it remains a Re-entry home for Teen Challenge to this day.  Bill was excited that the house was continuously being used for ministry, even after he sold it.

Bill had a heart for the “least of these”.  He gave generously to ministries supporting those in need and mentored children who lived in his neighborhood.  He also loved experiencing God in nature, serving as a counselor at Hume Lake Christian Camps for Westside Ministries youth and signing up campers for YMCA camp.

In later years, Bill served in men’s ministry at Calvary Chapel Modesto, as a Home Fellowship Leader and as a bible study leader with Ted Glauser.  Bill was also at the church for clean up when the building flooded in the 1990s.  An avid cartoonist, Bill had his work published in the newspaper for the Stanislaus Special Education Local Plan Area, the Tahoe World, and the newspaper at CSU Stanislaus.  His friends and family members gratefully accepted his cartoons as gifts.  After removing wallpaper from the dining room walls in their Turlock home, Bill used one of the bare walls to draw a life-sized picture of Linda’s mother on a motorcycle before re-painting the room.  His mother-in-law adored it!

The only sport he avoided was golf.  He went to play once, aimed at a tree (being sure he would miss it), and ended up hitting the tree. The ball came back, hitting him in the leg.  He never played again.

He is preceded in death by his father, William Koogle, and his mother Evalena Koogle and his brother Danny.

Memorial contributions can be made in his memory Westside Ministries P.O. Box 354 Turlock, CA 95381.