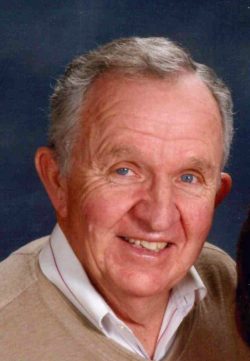 October 1940 ~ January 2021_x000D_
_x000D_
Ralph P. Smithcamp was born on October 31, 1940 at home in Turlock, CA to Clarence and Beatrice Smithcamp. He was the youngest of 12 children. A proud Turlock High School graduate, Ralph was on the 1957 THS undefeated football team and is a member of the THS Hall of Fame. It was at a THS dance in March of 1959 where he asked Lorraine Garcia to dance for the first time, a dance which would ultimately spark a lifelong love. Ralph and Lorraine both graduated from THS in 1959, and were married on January 15, 1961. They continued to lovingly dance through life together for nearly 60 years of marriage.

Ralph spent his long-term career as a truck driver. A dedicated and hardworking employee, he was known to wake up in the early morning hours with no alarm, arriving early and ready to work long days without complaint to support his family. Ralph started his career at Prouty Trucking, where he owned and operated his own truck. In 1972, he began working for Foster Farms Feed Mill in Livingston, and he finished his trucking career at A.L. Gilbert in Keyes, from where he retired in 2005.

A devoted husband, father, and grandfather, Ralph treasured the time he spent with his family. Even after long days at work, he was eager to return home and support his childrens’ interests. Through the years he coached their baseball teams, bowled, and played softball. Ralph was a steadfast pillar of support in his family’s life. Whether it was sporting events, band concerts, or award ceremonies big or small, they could count on Ralph to cheer them on. He was each and every child, grandchild, and great grandchild’s number one fan who showed his love and support with a warm smile and steady handshake.

Ralph spent most of his free time nurturing and maintaining his treasured yard and garden. Neighbors, friends and family knew that if they passed the Smithcamp home, they would see Ralph out working and be greeted with a smile, wave, and nary a stray grass clipping or unpulled weed in sight. He was always eager to share the fruits of his labor – lovingly tended fruits, vegetables and flowers – with everyone he loved.

Ralph and Lorraine also loved to travel. Together they visited Canada and Mexico, took cruises, and visited various states including Hawaii and Alaska. Ralph was always a willing participant to head out of town on a vacation or a day trip with family and friends.

In fact, virtually the only time Ralph could be spotted sitting down was to tune in to a game. He was an avid, lifelong fan of the San Francisco 49ers, the San Francisco Giants and the Golden State Warriors. There were heartaches and joys through the seasons, but Ralph was a steadfast fan who never missed a game, especially if he could watch with a loved one.

Ralph was a member of Sacred Heart Church in Turlock and belonged to the Knights of Columbus #2557, as well as Sons in Retirement 143. He volunteered time for his community with St. Vincent de Paul and was a 6 gallon donor for Delta Blood Bank.

A dedicated, patient, hardworking, witty, and selfless man, Ralph set a wonderful example to all who knew him on utilizing love, hard work, and tenacity to build a bountiful life. He will be dearly missed by all who were fortunate to know him.

A private family mass will be held at Sacred Heart Church. A public graveside service will be held on January 14, 11 a.m. at Turlock Memorial Park.