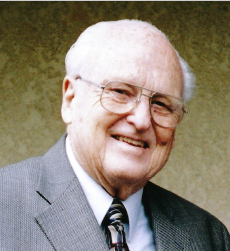 Harvey R. Stranske, 91, of Turlock passed away June 6, 2018.  He was born in Pasadena, CA, the son of Ephraim and Lydia (Rexius) Stranske.  After graduating from Biola, he went to the mission field in Sudan, Africa for 15 years.  He then worked for Merrill Milling in Turlock before returning to Christian service first at Western Bible Institute in Morrison, Colorado; then as pastor of Grace Calvary Church in Englewood, Colorado; and finishing his career in administration and recruitment of missionaries with Africa Inland Mission. His last years were spent as a resident at Covenant Village of Turlock.

Harvey is survived by his beloved wife of 72 years, Evadene; three daughters: Charlotte Holcomb of Portland, Oregon, Faith Hintz of Nunica, Michigan, and Susan Carlson of Turlock; two sons: Raymond of Denver, Colorado and Timothy of La Habra, California; 16 grandchildren, and 20 great grandchildren with one on the way.  He also leaves behind two sisters: Evelyn Moore of Duarte, California and Lila Sheffer of Sunland, California.  He is preceded in death by two sons: Donald (1955) and Darryl (1972).

A memorial service will be held at 2 pm on Thursday, June 14, 2018 in Berg Hall at Covenant Village.